Only one race was held today on Biscayne Bay and it was trying.  The race committee postponed ashore again today waiting for wind and finally around 13:30 a feeble southeasterly breeze filled in at 5 knots. The wind died throughout the race to less than 1 knot at the finish.

Josh and I had a good start and sailed well to lead at the first mark.  The wind was getting spotty on the first downwind leg and Augie Diaz found good pressure off the the right side and moved from 6th to a close second.  Josh and I held the lead at the second windward mark with Augie and Arnie right in our tail but with a huge gap back to third by this time.

The wind dropped to 2 knots at this point. 3/4’s of the way down the  final run to the finish, Augie gybed away, again to the right, and it was too light to cover (match). The little wind that there was then shifted 60 degrees in his favor and he won the race. Jack Jennings passed us as well. We were lucky to get 3rd as the wind kept shifting and we almost could not get to the finish line.

We finished 6th over all for the Walker Cup and are in that position going into the final two days of the Mid Winter Championship. 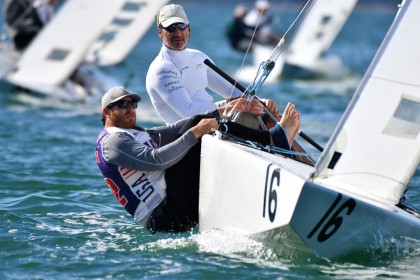