One race was held today on the Choptank in 7-10 knots and rain. The wind was just as shifty as it has been all week.

Brian and I had a decent start and sailed pretty well not he first leg (and were lucky that our side worked out well) to round the first mark second to Doug Smith and Chris Rogers. We managed to pass Smith Rogers to lead at the end of lap one.

On the second upwind leg, we protected the left side as it seemed good that far in the race. This meant that we were within 10 degrees of the port lay line with 12 minutes of sailing to do. That wasn’t enough protection! 5 boats passed us to the left!

The final run was a fetch and so was the final windward leg to the finish. We managed to pass two boats to finish 4th in the race and in the regatta.

Torben Grael finished in 11th and that’s all he needed to do given that Arthur and Dave were 9th. Tomas Horno and Josh Revkin had a very good race finishing 3rd and that was enough to boost him past Aurthur and Dave for second in the regatta.

All in all, its been a fun 8 days in Maryland and we had 13 races in that time. As frustrating as it can be at times, sailing in very shifty conditions makes you sharp. You have to make so many decisions over the course of the race as compared to very steady conditions which are more about boat speed.

Next Star appointment for me and most of the boats here will be the Winter Series in Miami starting with the Schoonmaker Cup, November 22-23.

For complete results for the North American Championship, go to: www.starclass.org

Two races were held today with a shifty northeasterly breeze that blew between 4 and 8 knots.

Torben Grael and his crew Guilhherme Alimeida of Brazil dominated the day with a 2,3 which moved them into a 10 point lead going into tomorrow’s final race.

Brian and I had a terrible first race. We just couldn’t pick the correct way to go to save our souls. We finished 25th. In the second race we managed a 5th which wasn’t bad considering we were 12th after the first lap.

Arthur Anosov and his crew Dave Caesar had a fairly tough first race finishing 18th but finished 4th in the second race. This pushed them down to second overall in the standings, 10 points behind Grael/Alimeida.

Larry Whipple who lead the first lap of the first race got passed by 17 boats up the second windward leg. It is a very difficult place to race. No real pattern to figure out.

So with one race left for tomorrow, the top 5 are:

For complete results go to: www.starclass.org

Two races were held today on the Choptank in 5-10 knots of wind. Here it isn’t that the wind starts at 5 knots and builds to 10 or the reverse. Here the wind is 5-10 every minute of the day. And it shifts 30 degrees too.

Brian and I finished 3rd in the first race when we should have finished 8th or so and 11th in the second race when we were much closer to the front on the first leg. But that’s the nature of the racing here.

The Schofield brothers won the day with a 4, 1.

Arthur Anosov and his crew, Dave “Julius” Ceasar continue to dominate the regatta. The have great speed upwind and are sailing smart as well. They finished second in the first race today but were caught by the black flag at the start of the second race today (if u r over the start line early when the black flag is up u r disqualified) but will discard that score to to remain on top of the leader board tonight.

I am not sure how the scores work out as they haven’t been posted yet but I think Brian and I are in the top 5 and Arthur and Dave have a significant lead.

Two races are scheduled for tomorrow and one for Saturday.

So I am writing fast and there may be typos.

It was a perfect clear blue sky today following thunder, lightening and rain last night. The wind was 6-9 knots form the west but at times it dropped to 4 knots.

Brian and I had an up and down day. We sailed well and finished second in race 1 to John MacCausland with Arthur Anosov just behind us in third. Torbern Grael in 4th after a big comeback.

In the second race, we were about 10th after the first lap but we missed two big shifts on the second windward leg and finished 25th or so.

In the third race, we got to the first mark first and the wind dropped to 4 knots on the run, we got to the leeward mark 12th. We went with the leaders up the right side (the side that had paid on the run) and the left was much better. So the leader of the race, Mark Hollowesko went from first to 15th and we went to 25th. Down the final run we manage to pick off a few boats and finish 17th or so.

Upon arriving at the dock, we learned that Torben Grael, who finished about 30th in the 3rd race was protesting the race committee for running the 3rd race. It was 18:30 when we got the boat out of the water, so Brian and I did not need to stay around to find out what happened.

We are taking our very kind hosts, the Tom and Alexa Seip, out to dinner.

Forecast for tomorrow is 2-5 knots of wind from the west.

The Battle Begins Tomorrow, Who Will Be the Last Man Standing?

Needless to say, the level of competition will be extremely high, the racing will be close all the way through and with the rigorous Silver Star Championship format, the Star sailors certainly have their work cut out for them. The 7 race series is scheduled across 4 days, First Warning will sound no earlier than 1100hrs EST each morning, no more than 3 races are allowed to be held in a single day and courses will be set between 5 and 7 nautical miles in length total. 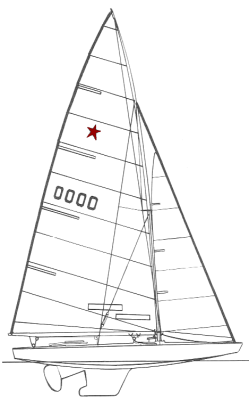 Two races were held today on the Choptank. (Love that word. Very appropriate as the water is choppy out there!) It was clear, cold and a brisk 50 degrees when we headed out to the race course at 0930.

The wind was 7-12 from the west with 30 degree shifts today which made racing anything but straight forward.

Brian and I managed to win the first race with the consistent Arthur and Dave team in second place.

In the second race, we had a good start and had Arthur and Dave seemingly under control when the wind went light and we had a reshuffle. Arthur and Dave went from 6th to 1st while we did the opposite.

We had some chances to get back I into it but Arthur and Dave sailed very well to win the race while Brian and I finished 5th.

So Arthur and Dave won the Wind Up and Brian and I finished second.

For us the main goal for this weekend was to make sure we are happy with the tune of this boat and get our boat maneuvering sorted out. We achieved most of that but need to keep working on out upwind speed. Arthur and Dave were a bit quicker than us.

The North American Championship starts Wednesday. I am going golfing with my buddy Larry Whipple tomorrow!

The Oxford Fall Wind Up is a tradition in the Star Class for 63 years. Tred Avon is the host club and this year the Wind Up also serves as the tune up regatta to the North American Championship which will be, here in Oxford, on Wednesday, November 8-11.

I am back to Star racing, and looking forward to good competition and camaraderie with fellow Star sailors. I am also happy to be on the Eastern Shore of Maryland which is a beautiful part of our country. Brian and I are staying with my long time friends Tom and Alexa Seip at their beautiful farm in Easton, Maryland. Alexa is a competitive horse rider… not sure if that’s how you say it… so there are horses and barns and hay and stables and horse pens on the property. I spent an hour with Alexa and the horses yesterday morning. Very cool to see and learn about something new and different.

Back to the Star; I am racing with here Brian Terhaar. This is the first time we have teamed up. We are using my Folli Star, also for the first time, so there are a couple of good reasons to be here early.

The fleet of 30 Stars raced three races today on the Choptank… a part of the Chesapeake Bay. The wind was 10-15 knots from the Northwest. It was shifty and choppy out on the Choptank!

Brian and I won the first race, which was my first race in this boat. A good omen, hopefully!

Arthur Anosov and his crew Dave “Julius” Caesar sailed very well to win races 2 and 3 while we finished second and third respectively.

After three races Anosov and Caesar lead the regatta with 5 points while Brian and I have 6.

Two races are scheduled for tomorrow starting at 1030. I guess they like to get in early for football and burgers around here. Sounds good to me.

For complete results go to: www.regattanetwork.com/event/9020#_newsroom+results