Three races were held today in 8-15 knots of wind.  At times, the gusts were up to 17 knots which is a lot of wind for these restored, 50 year old, boats.  There were a few breakdowns today.  Brian and I gingerly sailed the last lap of race three with a broken backstay attachment.

In the first race of the day, race 3 of the regatta, Brian and I led wire to wire keeping things rolling from yesterday.  In race 4, we got out of phase with the wind shifts early and got in traffic.  On the second windward leg we went left which the locals have been telling us all week, is the favored side here.  The only time we didn’t win the race is when we went left.  We finished 5th in race 4 while are closest rival, Arthur Anosov and Julius Caesar won the race.  Andy Mac sailed very well to get second in that one with Mark Reynolds and Johnny Mac rounding out the top 4. 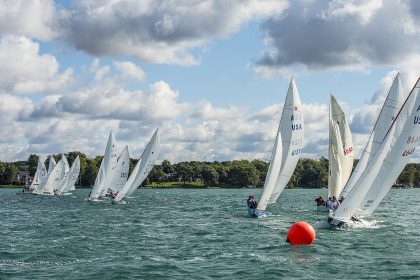 Race 5 saw Brain and I get back on our form.  We were third to the first mark, and stayed in third at the bottom gate.  Arthur rounded the right hadn’t gate and headed off the the left while we went back to our favored right side behind Andy Mac who was having another great race.  We played the right and worked the shifts to lead at the top mark and held our lead down the final run to take race 5.

I called Durward Knowles, Gold Medal winner in Gem IX in 1964, after racing. I actually Face Timed with him so he could see the boat and some of the guys. We used his care takers phone.  He is 99, soon to be 100.  I told him he could see us in the phone.  He said: “No Mon! Not in the phone.”  Imagine what its like to be 100! He really enjoyed seeing his boat and all his old friends.   Oldest living Gold Medalist in the World!

After racing , there was a concours de elegance, with 20 judges all viewing the boats and asking us skipper why our boats are special.  Mine, 4789, is the only Gold Medal winner in the feet and the only varnished hull.  The keel is painted gold so I told the judges it was made of gold since the boat was a gold medal winner.  Some of them bought that.

I am not sure who won the concours de elegance but I do know that Brian and I are leading the sailboat race with 4 points after a discard and Arthur and Julius are in second with 8 points. 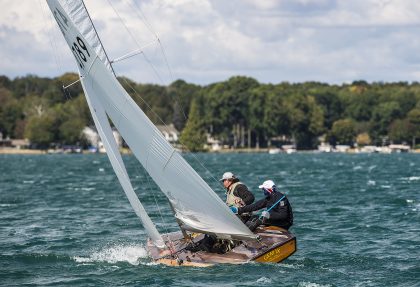 Of utmost importance, tomorrow morning at 08:00 we will play the back 9 of the golf tournament. My partner, Jim Babel, and I are tied with Reynolds & Reynolds for first place.  I played better than usual Thursday so I am a bit worried about tomorrow’s expectations.

The wind forecast for tomorrow is light winds.  This could be the great equalizer as it is very easy to get big shuffles in the fleet with light and shifty winds.  Two races are scheduled beginning after golf.  This is civilized sailing!

You need to go to Vintage Gold Cup on Facebook and see the great video’s of these cool boats. A big thanks to Don Parfet and Jon Vader Molen for getting these boats together, out on the track and inviting us all here to sail them!!!

By the way, there are more awesome wooden boats out here in the midwest. 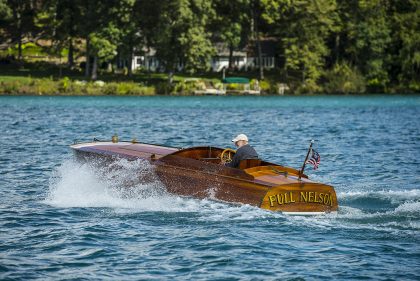 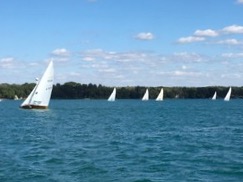 Twelve incredibly well restored Stars are racing in the first Vintage Gold Cup here in Michigan. The boats and the creation of this event, are the passion and dream of Jon Vander Mullen and Don Parfet.  Most of the boats are over 50 years old and all are wood.  They have been updated with Aluminum masts and currents sails. 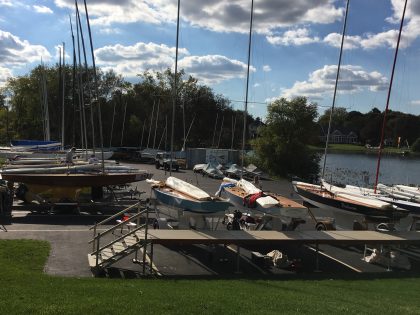 The regatta will take place from today through Saturday September 30.

I am sailing Gem IX, Sir Durward Knowles Gold Medal winning boat from the ’64 Olympics in Tokyo with Brian Fatih crewing. Obviously Durward tuned her up pretty well for us because we won the first two races.  This was such a great day for me. Durward has been a mentor for me in the Star Class since 1982 when I first stayed at his home during the Western Hemisphere Championships that were held down in the Bahamas every even numbered year. I won my first major championship in Nassau in 1984 and repeated that three more times over the following 20 years, always while staying in Durwards home. 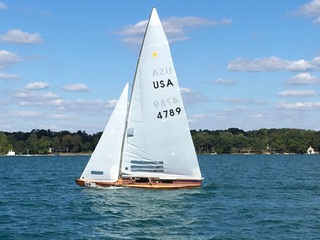 Arther Anosov, sailing Magic, with Dave Julius Ceasar,  is in second over all with a 3, 2

Jon Vander Molen sailing his Heather, with Rick Burgess crewing, are in third place with a 2, 7.

Mark Reynolds, in Flapper, with Michael Brundage are in fourth.

There races are scheduled for tomorrow and two on Saturday.  To say the winds were shifty is an understatement.  Today, things just went our way.  I am quite sure tomorrow will be a different story.  So I am enjoying the moment!

There is an award for a combined gold/sailing score so some of us golfed in the morning today and will play the back 9 on Saturday morning.

The evening events are pretty spectacular too.  Last night was a big dinner for 150 on the lawn at Don and Anne Parfet’s home on the lake and tonight is a dinner and visit at Gilmore Car Museum which is amongst the best car museums in the world with over 450 vintage cars in pristine condition. I even drove a ’58 Corvette and they have my first car, a ’70 Chevelle SS in the same color! 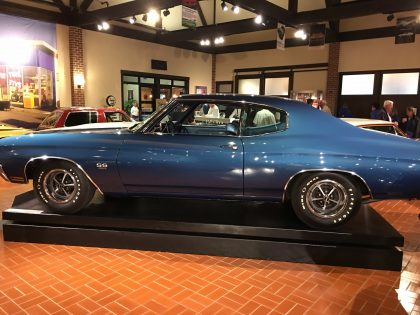 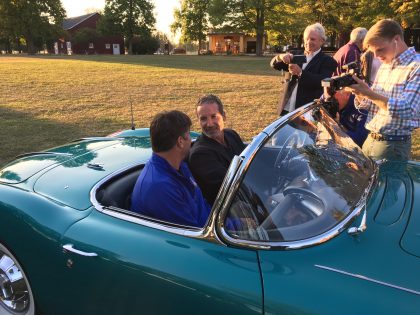 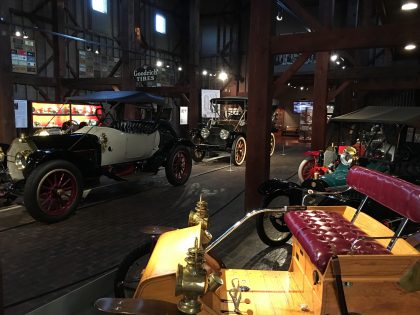