Three races were held today, in a 15 knot northeaster for the Star fleet on Biscayne Bay.

16 teams were happy to get out for the Winter Series opener after racing was cancelled yesterday with gusts up to 40 knots.

In race one, the windiest of the day, Augie Diaz and Bruno Prada took the win. Phil and I passed Eric Doyle right before the finish to take second.

In race two, Doyle was on fire and led wire to wire with Augie and Bruno in second and Phil and I third. There were some good sized shifts coming off Key Biacayne and I did not get us in phase.

It was pretty much a who beats who in the final race. Doyle was over early and had to restart and Phil and I had a nice clean start and led wire to wire to take the Schoonmaker Cup.  We were both fast and in phase finally.

This was the last opportunity to train before the SSL Finals which start in about three weeks in Nassau.

Phil and I had decent speed but need a bit more time in the boat together to smooth out the corners.

Back to SFO tonight. 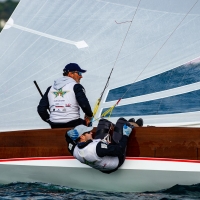