Big day on Great Sound.  Four races were held at the upper limit of the wind range today and the skills of these sailors were tested.  The pre start jostling was rather tame today and in three out of the four starts, one of the teams was late to the line.  It seems that teams had come to the conclusion that they weren’t going to win the race at the start but they could easily loose it.

The first pairing of today was Artemis vs. Softbank Japan. Artemis was late to the line and had significant control problems.  Around the leeward mark Artemis stuffed the bow into the water and ripped off the fairings on the forward beam.  Their control problems continued and the Japanese, who sailed relatively smoothly, went on to win.  Artemis retired on leg 7 to save crew energy and effectuate repairs for their next race.

Several teams were at the limit of control today and I am not sure if it was the sensitivity of the mechanism that is hard to control or a lack of hydraulic oil being supplied.

The second race featured ETNZ vs Land Rover BAR. ETNZ had damaged their wing in the morning tune up session and had to hustle in to put in their backup wing and made the start with 3 minutes to spare. ETNZ was late to the line and BAR was sailing smoothly with decent control while the Kiwi’s looked a bit wobbly. By leg 5, upwind, the Kiwi’s had settled their boat down and the speed started to kick in. As they closed in on the Brits, they set up to leeward on a long starboard tack.  Slowly but surely the Kiwi’s edged forward and when they reached the boundary, they were able to tack and cross BAR.  From there the Kiwi’s looked solid and stretched away for their third win in the series.

In the second race between Artemis and Japan, Japan won the start once again. Japan looked in control as they bore away at the first mark hitting 46 knots!  Artemis lost control, could not bear away and subsequently went out of bounds and was awarded two penalties. The Japanese sailed off to a big lead which they managed the whole way around the track for their second win of the day.  Japan now leads this series 3-1.

In the final race, ETNZ was schooled by Ainslie and locked out at the windward end at the start.  As Ainslie bore away to cross the line, at the last possible moment, Burling tried to follow.  Unfortunately for Burling, he had trouble managing the maneuver and pitch-polled the Kiwi boat.  Race over.  Fortunately, no one was injured but the damage was significant.  As they had a problem with their #1 wing this morning it was a shore and safe, and will be ready for action tomorrow.  But the electronics in the port hull and the fairings  all over, were certainly worse for wear.  It will be a long night in the Kiwi shed but they may get a break in that the forecast for tomorrow is 40 knots of wind.  So they may get and extra 24 hours to get their craft back in once piece. 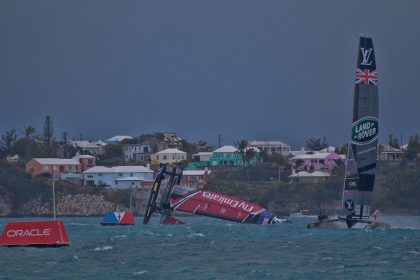