This cake is pretty well baked.   There are people remembering the comeback of all time in 2013.  Same teams, same situation with ETNZ on match point and Oracle with a very steep hill to climb.  But the situation is much different.  There is no “low hanging fruit” this time.  The boats are very developed and there is no 10% increase in boat speed to be found over night. If there is to be a comeback, it is going to be through exceptional sailing on the part of the USA team, something that frankly has been glaringly missing in the America’s Cup.

It isn’t that the Kiwis are doing exceptional things.  They are fast, but so is Oracle now.  They are sailing consistently and they make high percentage decisions.  On top of that, Oracle is making it easy for the Kiwis. This entire series, starting with the start of race 1 when the American team was penalized for being over the start line early, has been a demonstration of sub par sailing by USA. The start of the second race of today was an example of that.  Spithill tried to get tricky and Burling simply hooked him, parked him and left him for dead. 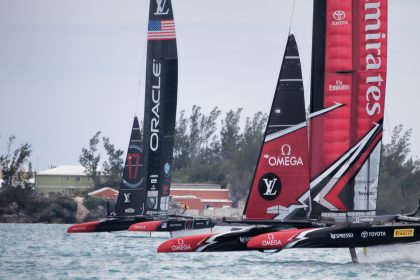 Emirates Team New Zealand 14 seconds ahead at the start of race 8.

The world was expecting a different American team following on from the win in race 6 and solving their speed deficit of the first 4 races.  Yet, right from the start of both races today, the Americans were on the back foot…14 seconds worth in race 2.  You can’t beat this Kiwi team sailing like that.  Then the Americans even sailed out of bounds in race 2.  How?  Why?  Hard to understand.

The forecast for tomorrow is more of the same; 5-10 knots of balmy, humid wind.  Just like the Kiwis like it. It could all be over by 14:35 tomorrow.

But Jimmy Spithill is vowing to take it one race at a time.  He says they have the speed to win but admits they needs to sail better.  The lineup of the crew came into question at the post race press conference and Jimmy said; “Everything is on the table”.  He said that he and Tom Slingsby will make the crew decisions for tomorrow just a they have always done. I think substituting someone for Spithill as this stage would be suicidal. The Kiwis tried that in 1992 with Russell Coutts coming in for Rod Davis and as good as we all know Russell is, it didn’t work. The only way to victory for this team is to hang together and sail perfectly, 6 times.  But they only need to, and only can, win one race at time.

It is a very, very tall order.