Match of the Day-Oracle vs. ETNZ

The final four races of the qualifications series for the 35th America’s Cup were held today in Bermuda in 12 knots dropping to as little as 8 knots as the day went on.

New Zealand vs. Oracle Team USA was the first race of the 35th America’s Cup as the American Team won the race, the series and takes a one point advantage into the America’s Cup Final no matter who the challenger is.

However, Oracle will not race again until June 17.  Meanwhile, starting tomorrow, the challengers continue their elimination series with the semi finals.  The Kiwi’s, being the top challenger, have chosen BAR as their opponent in the semi finals so that leaves SoftBank Team Japan and Artemis Team Sweden to race in the other semifinal.  The first team of each of these pairings to get 5 points will move onto the Louis Vuitton Challenger Finals.

Meanwhile, the qualification series eliminated Groupama Team France.  The team was noticeably deficient in lift from their boards in light air.  They made a gallant effort and won many fans over.  Hopefully they will be back in 2019.

Race 27: Oracle Team USA vs. Emirates Team New Zealand.  Jimmy Spithill schooled the young talent, Peter Burling, at the start giving the Kiwis a penalty. I think this is the Kiwi’s weak point.  In all boat on boat situations, the Kiwi’s come out worse than their opponent.  When they are free to sail in the open, there is no one faster or steadier in their boat handling. The Kiwi’s made some gains upwind and Oracle even ducked them once.  But Oracle, coming back on starboard tack, made the Kiwis tack very close to the windward mark and simply rolled through to leeward and sped off to a huge lead.  On the second windward leg, Oracle pushed the Kiwi’s into the lower right corner by tacking on them.  This produced a 200 meter gain at the next cross. Game over. 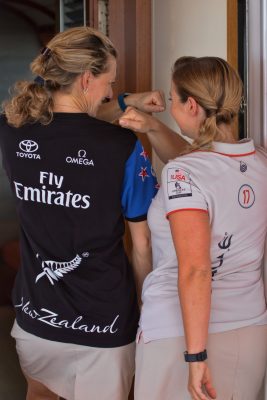 We had a bit of a rift on Rosehearty for the first time ever!

None of the rest of the races for the day meant anything to the standings of the qualification series.

Race 28: BAR vs. Japan.  BAR got to leeward of Softbank team Japan and luffed them to a halt just after starting.  Picking his moment to accelerate away, Ainslie stretched to a massive lead on the first run. Japan closed up the first windward leg and went for a cross at the top of the leg but fouled BAR.  This may have been a calculated  foul as ducking the Brits would have left the Japanese in no mans land and the extra tack would have cost 10 lengths where the penalty cost just two lengths. Still the Brits were back in front and maintained control up the second windward leg, game over.  This leave the Japanese as clearly the worst performers of the qualification series and likely suspects to be chosen by the Kiwi’s for the semi finals.

Race 29: France vs. Sweden: Outteridge hooks France and shuts them out at right end of the line.  Penalty to France while the Swedes fly away.  During the course of this race, the French were not able to foil consistently in the now 8 knots of wind.  Artemis had a 96% fly time and won the race by over 2 minutes.

Race 30: USA vs BAR. Spithill dominates the Brits on the start by pushing them down to the lay line for the pin and the gaping up to windward and rolling over BAR.  Then a bit early, the American Team sails down over the Brits and gases them i the final 10 seconds to have a handy lead off the line.  The American’s showed excellent control of their machine and good tactical decision making today. Their best day so far. BAR struggled a bit in the light air having a lower fly time that USA and USA went on to win by 35 seconds.

Final points for the Qualifications Series:

The shore teams for the four teams will be working hard through the night to be sure everything is perfect for tomorrow morning. Who knows, someone may have a configuration or board change to employ.  All these teams need to keep evolving in these next two weeks.