BAR and Softbank duel before the start

The 35th America’s Cup got underway today with 6 matches.  The conditions were ideal with southwest winds of 11-13 knots and flats seas.  The race course is inside Great Sound and the America’s Cup village and bases are at Dockyard, the most western extremity of the island.

I will be down here for the entire America’s Cup which runs from today through June 27th.  I have two roles; for the first two weeks I am an onboard expert ( a nice way of saying a “has been”) for the yacht Rosehearty and her guests.  From June 9, I will join the ACTV team for the daily broadcasts.  Also, I will try to write something every day for you.

The racing today was better than I expected.  Four of the 6 matches were very closely contested and 5 of the 6 teams seemed fairly even with only the French off the pace. The boats are very fast, 35-40 knots today and it is impressive to watch them live.  Two of the matches ere spectacular; Match 2, Japan vs. Sweden and Match 5; New Zealand vs. Oracle Team USA. In Match 2, Japan (Softbank) got out to a strong start and built a lead of 20+ second only to be reeled in and passed by the Swedes (Artemis), on the second windward leg.  There were 30 degree wind shifts on the course and Artemis played them well.  Japan tried to tack on Artemis half way up the second windward leg but the Swedes simply powered through them and forced the Japanese to tack away.  That was pretty much the end of it as Artemis got to the right and had starboard tack advantage at the next cross. Artemis went on to win fairly comfortably.

In the rematch of the finals of the 34th Americas Cup in San Francisco,  Oracle led at the first mark only to be passed by the Kiwi’s who got a left shift upon the first windward leg.  The Kiwis held the lead down the first run but the American’s got the split at the bottom gate and stayed out of phase  with the Kiwi’s but in phase with the wind up the second windward leg. At the windward mark, the Kiwis tried to tack onto starboard in front of Oracle but they were a bit late and the American’s shot through to gain room at the mark and luffing rights.  Oracle luffed the Kiwis rather aggressively but no contact occurred.  The American’s shot out in front and went on the win the race by 6 seconds. 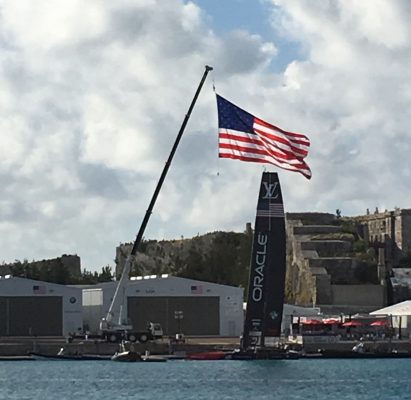 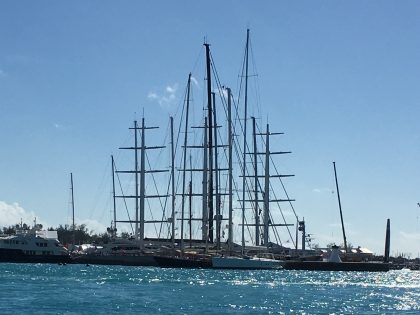 Oracle Team USA at their dock and Super Yachts in the AC Village Harbor.

In both of these races it seemed the boat ahead, half way through the race, had an unsurmountable lead.  I am excited to think that we may see these types of lead changes for the entire regatta!

In the final race of the day, Team BAR (GBR) was up against Softbank (JPN).  A substantial collision occurred 20 seconds prior to the start.  BAR’s port hull ended up on top of JPN’s starboard hull.  Fortunately no one was injured although many of the JPN crew had to move out of the way.  The port hull of GBR got quite a bit of damage from the brining handles on JPN which punctured holes in the hull of the British boat.  The British were deemed to have fouled and were further penalized but the umpires.

In the two days that I have been here, I have toured one team base, talked to a few of the sailors on various teams and met with the chief umpire to understand how they make the calls.  I have reviewed tape of these teams practice racing.  I have only scratched the surface of this event.  But I feel like this is going to be very interesting and very competitive. I believe a big part of winning this event will be evolving, improving, learning technique, etc.  No team is going fast enough today to beat the eventual winner.  So the team whose shore team and technical team can make the biggest gains coupled with the sailing team who learns how to mast what they have and use it in a consistent manner, will most likely be the winner.

There is so much to master.  Flying these boats in a consistent way, so that the hulls never hit the water, is very tough.  You can have more conservative boards and pay for stability and control with top speed, or you can live on the edge of control and hit higher speeds but maybe dip the hulls in the water more frequently when tacking or gybing.  Then you have the crew who are grinding, or pedaling as the case may be, for the entire race to produce hydraulic pressure. The hydraulic pressure is used to control all the wing and dagger board functions, which are critical to the performance of the boats. These sailors have become world class athletes, at the same level as a triathlete or soccer (football) player.

I need to explain the schedule, the format, the village, the pairings and so much more but I wont try to do it all tonight.

The forecast for tomorrow is for less wind…12-8 knots and dropping to as little as 6 by late afternoon.  Then light winds on Monday. For information, scores and more, go to https://www.americascup.com