The final two races of the 2016 J70 World Championship were held on Berkeley Circle Saturday.  The fleet made the 5 mile trek down to the circle in the customary light morning winds and for one last time, the arduous trek back to the St. Francis Yacht Club in the 20 knots westerly mixed with an outgoing tide and big waves.  I think most will agree, the trek was worth it.  the Circle served up a challenging week for tacticians.  Local knowledge didn’t pan out much of the time.  What worked on one run didn’t work on the very next.  It was a very open race course all week and that is what you need when hosting an event for 68 boats.

The winds were light at the scheduled 11:00 start time and Mark Fisher and his race committee postponed for 60 minutes to let the wind fill to 10 knots at the start of the first race. Joel Ronning and his Catapult team, with john Kostecki call tactics and trimming the main, went into the day with a 20 point lead and managed it very well with a pair of 4th place finished to finish with a 16 point advantage over last years World Champion Julien Fernandez of Mexico.  Judd Smith and his Africa got off to a huge lead in the first race of the day while we on Calvi Network had a bad first race with a 19th.  This switched the two of us in the overall standings.

Like all good one design racing, it is a matter of inches that allows you to cross a boat and then the rest of the line on starboard or if not enough ahead, to duck one boat and then 9 more.  I didn’t get us good enough starts in general this week and that made a difference when looking for those very important inches in the first cross of the first windward legs.

Before the start of the last race, I told out team that we were going to the right corner up and downwind.  That is “old school” Berkeley Circle.  And it was right.  We rounded the first mark 9th, after once again ducking 5 boats just before rounding at the top.  We immediately gybe set and planned off in the opposite direction of the fleet.  This turned into a 1 minute lead at the leeward gate, and life was easy after that!  Wining the last race was a nice way to finish a week in which I felt I did sail up to my expectations. 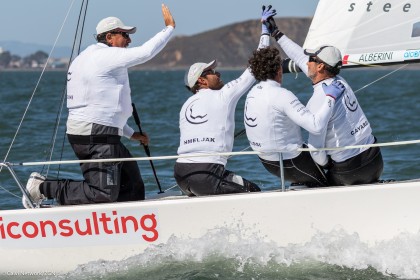 We on Calvi Network we finished 4th while the fastest boat on the track, Claudia Rossi’s Petit Terrible finished 5th in her first World Championship.

This J70 class has a great future.  The boat’s are fun to sail, especially in breeze, and are very affordable.  I would say that the technical specifications and measurement process needs a little improving.  But that is to be expected with a class that is virtually exploding with over 1200 boats built in its first 3 years.  Next years World Championship will be in Porto Cervo which I am sure will lure close to 100 boats.

I am off to Europe this week for a Star event in Italy and then the final event of the TP52 Super Series in Cascais, Portugal.