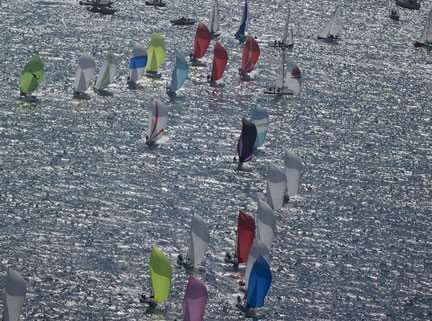 It really wasn’t our week. Two races were held today in very nice conditions and we finished third in both. Bella Mente won both races to win the class.

The breeze was in from the south-southeast at about 18-20 knots. There was a fair amount of chop and the downwind legs were fast. We “shrimped” the spinnaker at the first bottom mark and were over early at the start of the second race. That was not the way we had wanted to leave the week.

Competition is very cut and dry. There are winners and losers. You have to take your lumps when it is not your week. It makes you appreciate the good ones!

So now we have to look forward. That is the good thing about competing. There is always the next race!

The Shockwave guys couldn’t be a nicer group and I really enjoyed my time with all of them.

I am off the Miami for the US Olympic Sailing Team Annual dinner tomorrow night. AmericaOne is a large supporter of the USOST and I will be representing A1 there.