After five days of racing with 12 races, 4 of which were yesterday, Arthur “Tutu” Lopes(BRA) and I got the Bronze in the European Championship.

Robert Scheidt(BRA) showed once again why he is the athlete of our era. With his crew Henry Boening, Robert came from behind on the final run of the final race to pass Xavier Rohart (FRA) and Pierre-Alexis Ponsot to take the win. Mateusz Kusznierewicz(POL) with Federico Melo(POR) crewing, were fourth in the Final.  A four finalists are Star World Champions.

It was a very physical 5 days with 12 races, mostly in 15 knots and above and with free pumping for the final three races. The temperature of both the water and air was older than usual and the rain at lake level produced snow in the surrounding mountains. This meant a lot of layers of neoprene and that much more to fight against. I will be tired for a few days!

The European Championship, an International Star Class sanctioned event, was combined with the Star Sailors League(SSL), and titled the Breeze Grand Slam. The SSL has brought so much to the Star Class and Sailing in the last five years. This event was another example; 90 competitors from 16 nations, live coverage on the internet, You know the SSL from the Finals we race in the Bahamas every December. The idea is to have 3 Grand Slams per year followed by the Finals at the end of the year.

While I should be thrilled to get bronze against a fleet of 92 competitors, including some of the most decorated sailors in the world, I have a bit of remorse today. After winning the semi-final over Scheidt and Rohart. Tutu and I had the lead, albeit a small lead of 30 meters, for the first lap of the two lap Final. However, after rounding the gate at the end of the first lap, we chose to go left initially while Rohart and Scheidt went to the right. The next time we came together, they were 50 meters ahead. We chose to keep it close rather than splitting and looking for a significant wind shift. We were hoping for them to fight a bit and create an opportunity. That chance never came.

The remorse comes from knowing how hard it is to get in a position to win one of these championships, especially in the “knock out” era. There are so many chances to lose…. and yet we had made it to the final race, and we had the lead and we had the speed to win. As an athlete you don’t remember all the brilliant things you did that allowed you to qualify for the final, you only remember the final result. But that is the fuel that drives an athlete. Yesterday also happened to be my 60th birthday!

So for me, I will take that fuel into the Star World Championship, June 17-23 in Porto Cervo, Sardinia. The format will be different. Six races over six days, longer courses and one race per day. It has been 31 years since I won the World Championship. Last year I placed 3rd. I am still at the top of this game. To win another World Championship would cure the blues I feel today. I am driven! I can’t wait to get to the gym tomorrow! 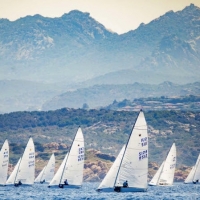