Jorge Zarif and crew Guilherme de Almeida (BRA) are the 2018 Star World Champions. At 26 years of age, Jorge, the son of a Brazialian Srar sailor of the same name, is the youngest winning skipper since Alex Hagen (GER) won the prestigious trophy in 1981.

The final day was challenging with 40 degree wind shifts and up to 25 knots of wind and a very steep, 3 foot, chop. The race committee had their hands full setting the course causing several recalled and postponed starts. In the end, the fleet was on the water from 09:30 to 18:30 to get races and 5 and 6 and the championship completed.

After doing the math Friday night, I realized that Arthur and I had only a very slim, mathematical, chance to win. We would have to beat Zarif In both races and remain in the top 3 in both races.

As we headed to the race course we had every intention of doing just that. In the first race, we got off to the left side and the wind shifted 30 degrees to the right. We came around the first mark in the 20’s and headed downwind. Halfway down the run, we swamped the boat. As the boat was now sitting lower in the water, the automatic bailers could not bail the boat before we took another wave over the bow. Realizing this would likely be our discard race, I decide not to
risk breaking the mast and retire from that race in order to be able to compete in race 6.

Going into the final race no one really was sure of the points as their had been a number of boats disqualified under the black flag at the start of race 5, making the point counting that much more difficult.

Tomas Hornos, with Pedro Trouche crewing, won the final race with Melleby close in second Zarif finished fourth and Arthur and I in 6th. 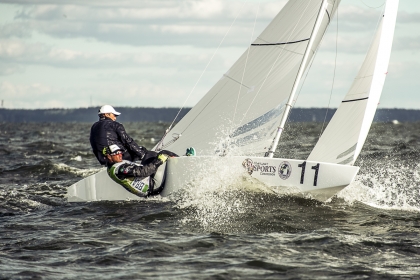 Along with Hornos & Trouche, 30 of the 124 sailors were 32 or under. The winning skipper was 26. Youngest competitor 15. The average age of this championship was under 50, the first time in 10 years. These are all very encouraging facts for the class.

The host club, Tred Avon, and the town of Oxford put on an outstanding event on and off
the water. Their hospitality and friendship could not have been better.

For the championship, the Star class has a very credible world champion, who is already Finn World champion and an Olympian. The defending champions finished second and Arthur and I in third. Negri/Lambertenghi, number one ranked Star team in the world, finished 4th.

While we came to Oxford to win, we are reasonably satisfied with our result. I first raced in the Star World championship 40
years ago at my home club, St. Francis, in San Francisco. There as a 19 year old crew, I finished 4th with boat builder Bill Gerard. That experience hooked me on the class of boat that has made me the sailor I am, led me to the career I have had and in which I will sail on for life. Here in Oxford, some more young people have become hooked on sailing thanks to the Star Class.

Next stop for us is the SSL Finals in Nassau in early December. 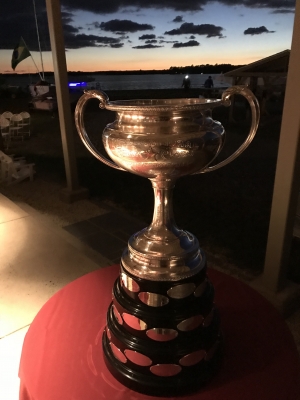