Four races were sailed on Thursday and Friday over here in Portugal for the Tp52 fleet.  The winds have been light all week and this is our weakness on Phoenix.  We have larger appendages than the newer boats and we feel it especially downwind.  On Thursday, we made the mistake of contorting our mast and mainsail set up trying to generate more power.  Normally this is a good idea but there is a such a thing as “too much”.  We hit that wall yesterday.  The set up was heeling the boat over but it was too much drag and the boat would not slip through the water.

We spent an hour out on the water last night after all the other teams went in, sorting through our set up.  We took a lot of photos of both set ups and of other boats.  We analyzed all that in our meeting late last night.  We came out today with a new set up and right from the get go, I could feel the boat was moving better.  While we had a much better day today, we didn’t win any races.  But the satisfying thing has been attacking our weakness and making a big improvement.

In terms of scores, we actually crossed the finish line last in one of the races yesterday and the other one wasn’t much better.  Today we had a 7 and 4 and in both races were were competitive with the top boats.  Again the conditions are not our best. 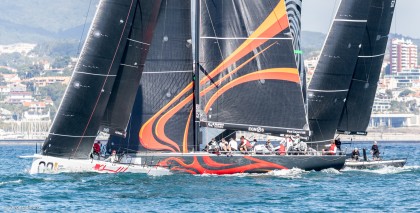 Yesterday Bronenosec, Quantum, and Sled had very strong scored while Azzurra wiped a bit.  Today Azzurra come back strong with a 1, 2 and took back the lead in the regatta.  These four teams are clearly the fastest in this 7-10 knots conditions were have been racing in.

Tomorrow’s forecast is for slightly more wind, 8-12 knots, but that is just a forecast.  We on Phoenix would certainly be happy with a bit more wind.

For complete scores go to: http://www.52superseries.com