Coming to the windward mark in USA8466-GEM

The two final races of the 2018 Star Western Hemisphere Championship were held today in 15-18 knots of wind from the southeastz. Jorge Zarif of Brazil was on fire winning both races today. It was very physical and the conditions suited the 25 year old Finn sailor perfectly.

Tutu and I had the second best scores with a 3, 2.  Lars Grael had finishes of 2, 4  which was sufficient to protect his lead and win the Championship. At the last mark of the last race, Grael was 8th while we were second. Finishing in these positions would have given Tuto and I the Championship. But Lars and Samuel sailed very fast down the final run to pass 4 boats.  I am happy with our performance considering it was our first time sailing together.

The only sailor not from Brazil in the first three teams was myself. Brazil has always been a strong sailing country and they are producing more good young sailors like Tutu and Jorge Zarif. 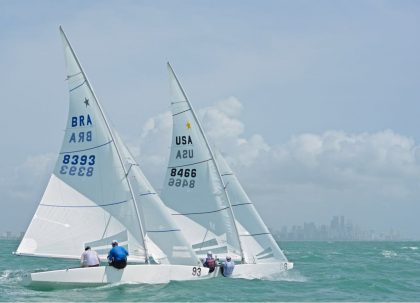 Leaving the windward mark…in a hurry!

This was the last event of the winter series here in Miami which started in November. The next Star Championship will be the Eastern Hemisphere Championship in two weeks time in Trieste, Italy. After that we will be racing on the west coast for several regattas including the North American  Championship at Marina Del Rey in August.

For complete results Go to www.yachtscoring.com