Today was the final day of racing here in Nassau. The quarter finals, followed by the semi finals and the final race, was the card.  The wind was 14-18 knots from the south and the race course was tucked in Montague Bay so that made for some big wind shifts and the breeze passed over the eastern end of New Providence.

Phil and I made the quarter finals by finishing 4th in the qualification series during the past four days.  In the quarterfinal race, we found ourselves to be fast upwind and led the fleet around the first mark.  Unfortunately, we found ourselves to be slow downwind, a theme that plagued us all week.  We managed to hang on to 5th and qualify for the semi final.  The two Italians and Ben Saxon (GBR) with Steve Mitchell were eliminated from this round.

Six teams raced in the semi final. The wind shifted to the right soon after the start, and Phil and I    were to the left of the fleet, so we were behind immediately.  Our speed was good but we never managed to find an opportunity to get back into the race.  British Laser Gold Medalist, Paul Goodison with crew Frithjof Kleen, sailed very fast down the final run and just managed to beat the German Team at the finish line to qualify for the final. Cayard/Trinter (USA) , the Polish team and the German team were eliminated from this round.

The final featured four teams: Mark Mendelblat(USA) who won the qualification series, Robert Scheidt(BRA), Xavier Rohart (FRA) and Paul Goodison (GBR).  The conditions hadn’t changed.  Mendelblat started to right of the fleet and controlled the first intersection. That small lead evaporated pretty quickly due to the wind shifts.  At the first mark Goodison, Scheidt and Mendelblatt were all bow to stern.  Rohart was not far behind. The group stayed in these positions the whole way around the track and once again, Goodsion won by just two meters.  He who caught and surfed the last wave would have made the difference.

This was the toughest of the five SSL finals.  The competitors were deeper than ever and the reasonably strong wind conditions required a lot of physical output.  I, for one, am pretty tired after racing 13 races in 5 days.  There are 11 Star World Champion skipper here.  Only four qualified for the racing today.  That tells me that the younger sailors coming from the smaller boats are very talented and sharp.  They are picking up the particularities of the Star rather easily and their talent is pulling them ahead.  I am very happy that the Star has been chosen to be the boat for this Allstar event.  I think it is the perfect boat for the task.

I had thought of not coming this year as I was concerned about where I would finish. In finishing 7th,  I exceeded my expectations.  I feel extremely lucky and honored to be able to race against all the sailors in this fleet.

As competitors we all owe a great deal of gratitude to Michel Niklaus for his passion and vision in creating the Star Sailors League.  His vision for the next 5 years is to have 4 “Grand Slam” events followed by the Finals each year.  He is purchasing 100 Stars and setting up bases in various venues around the world to make this vision come true.  He is continually upgrading the coverage of the event and the online following is growing exponentially.  This is one of the brightest events to come along in our sport in a long time.

Phil and I  want to wish everyone a happy and safe holiday season.

Three races were held today on Montague Bay of the east end of New Providence.  All 25 teams were ready for the all important final day of qualifying.

The winds were challenging today ranging from 4 knots to 20 knots with 30 degree wind shifts. The US team of Mark Mendelblat and Brian Fatih continued to be the class of the regatta with scores of 4, 2, 4 seriously dominating the competition.  They are fast and always on the correct side of the race track. Behind them, the British team of Paul Goodison and Frithjof Kleen sailed well to move into 5th place at the end of the day. The top four didn’t change through the day.

Phil and I  sailed a bad first race…. never seemed to be able to get on the correct side of the course.  In the second race, we sailed very well and even had a large lead at the first. The wind was very light on the first downwind leg and filing from behind. This caused the fleet to close in on us by the end of the leg.  We got passed by 2 boats and finished 3rd.  That finish was good enough to guarantee our place in tomorrows quarterfinal.  In the third and final race of the day, we finished 13th.  Again, there is no one who is easy to beat out there!

There are 11 Star World Champion skippers in this 25 boat fleet.  Only 4 of them qualified for the quarter finals tomorrow.  This says a lot about the skill and talent of the skippers coming from other classes who are invited to compete in the Star Sailors League.  This is exactly the idea of the league, to have a champion of champions competition.  The Star is proving to be the perfect boat for the job.

After sailing, Star Legend Sir Durward Knowles came down to the club to meet the sailors. As Sir Durward just turned 100, the Star Sailors League payed homage to him through a few short speeches and then we all sang happy birthday to him.  Amongst many records and accolades, Durward is now the oldest living Olympic Champion.

Racing starts tomorrow at 11:00 EST and the forecast is for fairly breezy conditions out of the south,

Remember to follow the racing live on StarSailors.com.  You can find full results, articles and photos there.

Very light wind made today very challenging for the 25 teams competing in the SSL Finals here in Nassau.  It was a balmy 84 degrees with 4-6 knots of wind from the southeast out off  the track today.  The Italians were on fire!

Francesco Bruni of Palermo posted a 4, 1 while his countryman Diego Negri scored a 3, 3 in these light conditions. Meanwhile Mark Mendleblatt and Brian Fatih maintained their consistency with a 1, 2 taking over the lead in the qualification series while Robert Scheidt slipped to second place with scores of 2, 19.  Beyond that, there was plenty of mixing.  Phil and I had an decent day with a 14, 9.  We were never at the front of the fleet having gone the wrong way on the first legs of each race.  In race 2, we hit the right side hard on the third leg and made a nice comeback from about 15th.  We managed to stay in 4th place which is a pleasant surprise and testament to the “trading” of positions that is going on in this fleet.

Three races are on the cards for tomorrow and the forecast is for 13-15 knots from the south southeast.  This will make for shifty racing as the wind will be coming over the island and onto the race course.  The seaway should be fairly flat.

I can’t tell you how much fun Phil and I are having racing against all these great sailors.  There is no other event in sailing that brings Olympic champions, World Champions, Round the World Record holders, Round the World Race winners and America’s Cup winners, together in a one design sailing contest.  Then to hold the races on the waters off the east end of Nassau, which is in my opinion the best sailboat racing waters in the world, makes the SSL Finals even more exceptional.

Finally, I want to say that it is an honor to be on the same race track with these athletes who have put a lifetime of effort, passion and commitment to achieve all that they have! 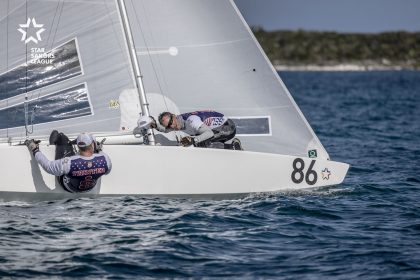 Day 2 was very good to Phil and I.  With scores of 1, 2, 20, 1 we jumped up to third place in the standings.  We were very fast upwind in the 8-10 knots of wind and able to hold our own downwind.  It has taken a lot of work for us to narrow our deficit downwind but very rewarding.

Our 20th place shows just how easy it is to get a bad score in this fleet.  Once you are back in the pack, the bad air and chopped up water makes life difficult.  There are no soft competitors out here!

We tied Robert Scheidt with 24 points on the day while Diego Negri of Italy had the best day with 22 points.  Phil and I made some adjustments to our rig which suited today’s conditions perfectly.

Tomorrow we will most likely have 3 races and the forecast is for less wind again.  Downwind is scorching hot with all the kinetics we are allowed to do in the 80 degrees temps. 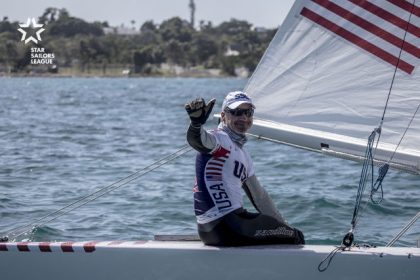 I hope you are enjoying the live coverage in the internet.  if you haven’t seen it, tune in at 11:00 EST tomorrow at www.starsailors.com.  There is also a feed on Facebook under the same name.  Complete scores can be found there too,

We check our weight everyday, morning and after racing as we are required to stay under a weight limit.  Interestingly, I lost 3 pounds today.  I  am working hard to rehydrate now and stretching to keep my lower back loose.  Needless to day, I will sleep well tonight!

The Star Sailors League got underway today with two races in 12 knots from the east. The competition has never been tougher here, or maybe anywhere.  No other sailing event puts 25 World Champions Olympic medalists, offshore champions together in one fleet on one race track.  See the entry list on www.StarSailors.com.

Phil and I had a decent day with a 8, 13.  We had very good speed upwind and struggled a bit downwind.  We are working hard on our downwind speed and have improved since Saturday when we first starting training.  There are a few Gold Medal Laser and Finn sailors here and they can really go downwind! There is plenty of sailing left so hopefully we can continue to improve through the week.

Robert Scheidt had the best day while Mark Mendelblatt and Brian Fatih (USA) also had a good day and had it not been for a foul at the top mark in the second race, they may have been in the lead having won the first race easily.  I    cant tell you how deep this fleet is.  Just look at the scores. It wouldn’t be hard to finish last in one of these races.

Four races are on the cards for tomorrow. The forecast is for 15 knots from the east-southeast which makes for perfect sailing in this 78 degree water.

The format for the SSL Finals is four days of “qualifying” followed by the quarter finals, semi finals and finals on the 5th day, Saturday.  The races are lived streamed.  Follow the SSL finals on www.starsailors.com and Starsailors on Facebook and Twitter.

I am really happy to be here sailing with my Olympic team mate Phil Trinter, to be amongst this great group of sailors, fighting for every inch on the race course.  These are the good old days!