Races 7 & 8 of the Star Midwinter regatta were held today in perfect Star Sailing conditions of 12-14 knots from the southeast. Warm air, warmer water, nice waves for surfing downwind and plenty of sunshine.

Irishman Peter O’Leary and his brother Robert sailed steadily, never finishing better than third in any one race, and won the regatta with 46 point. Josh and I finished strong and moved up to second place with 60 points in this regatta. By virtue of moving up today, we won the Star Winter Series. The Star Winter Series is the cumulative score of 5 events starting in November and concluding in February. I had two crews sailing with me over four of the five events; Magnus Liljedahl and Josh Revkin. Both are great Sailors and even better friends. 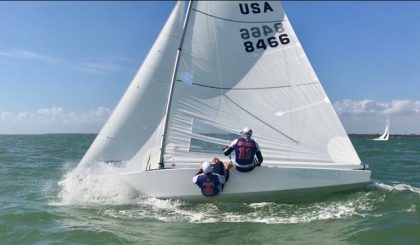 The racing was very tight and the lead changed hands several times in all races. Eric Doyle rounded the last mark of the final race in 5th and managed to grab the win.

For complete scores go to www.yachtscoring.com 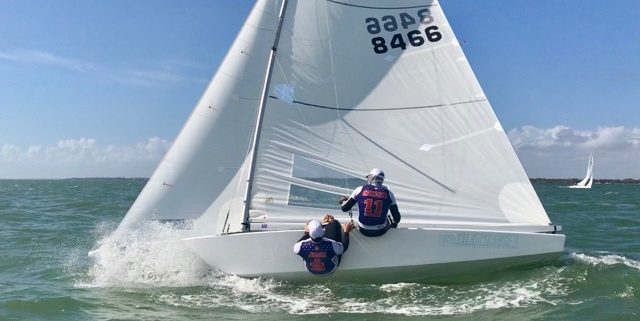 More perfect sailing conditions were on deck for the Star Sailors here in Miami….. 12 knots from the southeast all day, with some shifts, some not so subtle.

In the first race, Josh and I had good start up near the Committee boat (right side). We took a short tack to the right, got headed, tacked back to starboard, crosses the entire fleet and never looked back. Jack Jennings, the series leader was over the start line early and disqualified so that helped the rest of us catch up in the series. Eric Doyle, world champ from 1998 sailed well to finish second.

In race two, Josh and I had a good but conservative start given the black flag was up. (If you start early with the black flag up, you are disqualified, no chance to restart)

We flipped onto Port about a minute after the start, and with good speed led the fleet to the right. All the leaders were trying to get right, but some had bad lanes and had to tack out to the left to clear their air. I really thought the wind was in and steady and since we had a nice clear lane, we kept it simple and sped to the right. As we approached the right corner, the wind turned 10 degrees left.  Too much leverage!  We ended up 20th at the first mark and the runs became parades as the course was not adjusted.  No chance to pass.  Up the second windward leg, I sailed stupidly and got us out to the left and stuck in traffic.  We battled Augie Diaz/Bruno Prada all the way around the track..they finished 12th and we finished 15th.  Arthur Anosov with Dave Julius Caesar crewing, sailed a great race to take the win!   Jennings and Kleen did a good race and finished second and my good firiend and fellow SF Bay Star sailor, Doug Smith with Brian O’Mahoney crewing, finish 3rd.

The Irish team of Peter O’leary and his brother Robert O’Leary have sailed steadily and are now comfortably in the lead with 30 points. Augie Diaz and Bruno Prada are second with 44 points and Josh and I have moved up to 3rd with 53points.

Two more races are in store for us tomorrow and the forecast is basically the same…beautiful sunshine, warm water and 22 knots of balmy southeasterly wind.

For complete scores go to www.yachtscoring.com.

Day two of the Walker Series and Mid winter Championship for 44 Star teams from 8 nations.  The breeze was up a bit, starting the first race of the day at 16 knots for race 1 and dropping through the day to finish race 2 at 11 knots.

Jack Jennings and Frithjof Kleen won the day with a 2, 1 and Augie Diaz and Bruno Prada did very well with a  1-3.  The Danish team who led after yesterday’s two races, had two 16th places and are tied with Josh and I at 6th over all.  Josh and I had better speed but I didn’t sail super sharp today and we got a 4, 2.

Jennings/Kleen won the Walker series and these 4 races will be added to the next 4 races to decide the Mid Winter  Series Championship. 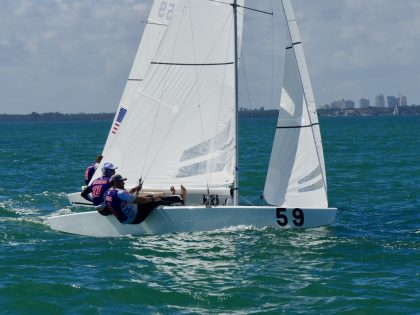 The forecast for tomorrow is more of what we had today.  Moderate winds and sunshine.

Today was the first day of both the Walker Series and the Star Midwinter Series.  44 Stars showed up for a one hour delayed start to race 1, on Biscayne Bay.  The delay was due to very light easterly winds which only ever got up to 7 knots today.  It was sunny and beautiful, just not very windy.

In race 1, Luca Modena and Sergio Lambertenghi of Italy led wire to wire, sailing smart and fast.  I am sailing with World Champion crew Josh Revkin this week.  Josh and I got off to a great start in race one but unfortunately went the wrong way on 3 out of the 4 legs.  We weren’t terribly fast either  and this coupled to put us into 20th at the finish line.  Augie Diaz, one of our main rivals was just behind us at the finish.

In race two, I got a horrible start and then fouled Andy Mac and had to do a circle.  This put us pretty much in last place, two minutes after the start.  And with the wind being so light, this was not going to be an easy race for us.  Nevertheless, Josh and I fought our way back to 11th at the finish line due to better speed after some rig changes and we went the correct way most of the time.  The team from Denmark, Jørgen Schönherr / Jan Eli Gravad, won race two with Augie Diaz and Bruno Prada close in second.  The Danes finished 4th in race 1 and are leading the regatta at this point.

So it wasn’t a great first day for Josh and I but there are three more days, and 6 more races, to go.  The forecast for rest of the weekend is in the 12 knot range which, I for one, will be looking forward to.

For complete scores go to www,yachtscoring,com

The Star Masters fleet, 32 strong, was treated to beautiful Miami conditions today with southeasterly winds in the 7-9 knot range and sunshine.

In the first race, Magnus and I had a good battle with our old friends Mark Reynolds and Hal Haenel. We traded the lead twice but Mag and I prevailed. Augie Diaz had a tough start and was back in the fleet on the first leg. He and his crew Bruno Prada made a good comeback to finish 5th and stay in the hunt for the overall.

In race two, Augie and Bruno got off to a good start and never looked back.  Mag and I battled Reynolds again and Loftstedt of Sweden. In the end we finished 4th while Diaz won.

In the finally tally, Magnus and I managed to win over Diaz/Prada and Reynolds/Haenel rounded out the top three for the Zag Masters.

We have three days off before the Walker Cup starts on Thursday. I am going to Nassau tomorrow to visit Star legend Durward Knowles.

Golf on Friday is the precursor to the racing on the weekend; normally two races on Saturday and one on Sunday. Today the breeze was toping 20 knots so with tomorrows forecast down around the 12 knot range, just one race was held on a, mast friendly, double triangle course.

Magnus Liljedahl and I got a rather conservative start and had to clear out soon after crossing the line.  Early leaders were Diaz/Prada and Reynolds/Haenel. Mag and I had to fight our way through a bit of traffic but with good speed and a couple lucky shifts, we managed to grab the lead at the first mark. We stretched on pretty much every leg and took the win. Diaz/Prada were second and McCausland/Cheer brought home third.

Tonight we have the Masters dinner which is a well attended soire.