Three days of racing here in the Caribbean, for 25 Super Yacht’s, concluded today with a 8-10 knots race, clockwise around the island.

For us on Rosehearty, it was quite a different week. Many of our usual competitors like Seahawk and Perseus were not in attendance this year.  Zenji and ourselves ended up grouped in class D with three yachts who weigh 1/3 of our weight. There was no contest.  The winner was Hap Fauth’s Whisper. Whisper and Blue Too beat us on average by 20 minutes each day.  A bit of a change for us as we had won our class that last two years here.

Four years on with the same core team on Rosehearrty and our crew work and  manouvers just keep getting better.  Today we actually started a drop, in a super yacht, when the bow was at the mark. That’s a first. Hats off to the crew of Rosehearty!

In other classes, Svea won the J class while Nilaya won Class A over Visione. The Class B winner was Sojana, Class C Farfalla, and Class E Missy.

Sailing in St. Barth’s is truly a special priviledge.

Off to San Francisco and tomorrow. Looking forward to being home.

The final race of the 91st Bacardi Cup was held today in 14-18 knots of wind from the south east.

Mark and I got off the starting line well and were amongst the top teams approaching the first mark.  We rounded second behind Robert Scheidt, with series leader Diego Negri in 6th.  All the top teams were in the top 8 so no big shuffling of positions, overall, was going to happen.

Negri who got forced to gybe right at the top mark, layed the bottom mark due to the windshift and moved into third place and safety for the overall.  Ian Percy also gybe early and moved into second.  I misjudged the layline to the first bottom mark and we slipped back to 6th.

We were fighting with Xavier Rohart of France and Luke Lawrence up the second windward leg. At the final mark before the run to the finish, Sheidt still led followed by Doyle, Percy, Negri, Lawrence, ourselves and then Rohart.

We played the right side of the run with Percy/Ekstrom while the others gybed away to the left. We had more wind and ended up 3rd and Percy caught Scheidt to win the race.

In the end, Mark and I tied for fourth with Lars Grael but lost the tiebreaker to finish the regatta in 5th.  That’s not a bad result in this fleet. 7 out of the top 10 are Star world champions.  I made a few too many mistakes this week and that costs points. I felt our speed was good and we got better together as the week went on. There definitely is something to sailing with the same team mate. 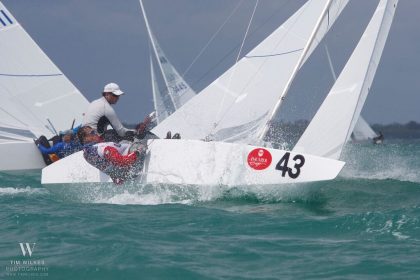 A big part of this week for me was honoring my good friend Sir Durward Knowles. I sailed with 4789, the number of his Gold Medal boat Gem IX, from the 1964 Olympics and with bow number 64 in honor of 1964. I want to thank Bacardi and all the competitors who helped honor Sir Durward on Monday.

I am flying to St. Barth’s tomorrow to join Rosehearty for the Bucket.  I will write reports from there next weekend.

Today’s 5th race of the 91st Bacardi Cup was held under perfect “Bacardi” conditions…..10 knots of wind from North North East.  This is still a shifty direction with the wind coming off downtown.

World Champions Lars Grael and Samuel Goncalves led wire to wire after playing the right side up the first windward leg. Diego Negri with Sergio Lambertenghi were right behind them followed by Eric Doyle.  Mark and I worked the left side, against the 10 degree right shift, but still mananged to round the first Mark 12th.  We were fast today, up and down wind.

It was a 5 legged course today with the final leg to windward. This gave Mark and I time, which we used well, to get up to 4th place by the finish.  We passed 2 boats in the final 50 meters. Grael, Negri and Scheidt were the front three and behind us were Doyle, Diaz , Lawrence, Percy, Melleby and Rohart.  8 world champions in the first 10.  It’s great racing out there!  So happy to be part of it!

So Negri has a 4 point cushion going into the final race over three boats that are tied on 14 points; Grael, Scheidt, Melleby. Mark and I are 7 points behind those three and can pass them with a very good race tomorrow. Unfortunately, we can’t win the regatta as Negri’s score counting all his races (including his discard) is  21 and the least we can finish with is 22.

The forecast for tomorrow is for good wind, maybe even strong from the East-Southeast.

For complete scores go to: www.yachtscoring.com

After yesterdays race was postponed due to thunderstorm activity in the area, today featured a double header. The wind was 12-18 knots from the northwest, which is always shifty here and makes for challenging racing.

In race one of the day, there was a big left shift off the line and Mark and I were not out in front enough to tack on it.  That lasted three minutes and then the wind shifted back to the right.  The boats that were able to play that first shift were the race leaders.  Robert Scheidt and Brian Fatih held the lead at mark one and stretched on every leg. Jim Buckingham and Craig Moss had a great race as did Elvind Melleby and Josh Revkin.  Mark and I had a great first downwind leg to get back in touch with the top group and even had a shot at 2nd in the last quarter mile of the race.  Unfortunately for us, the pack to our left surged ahead in the final meters and we came away with a 7th.

In race 2, I really couldn’t do anything right.  We went the wrong way on every leg and just got further behind. We finished 24th.  Hopefully that will be our discard.  I had a bad day today and sometimes that happens.  We just have to shake it off and come out firing on all cylinders tomorrow.

Eric Doyle with Payson Infelise crewing led at the first mark followed closely by Jack Jennings and Frithjof Kleen and then Diego Negri.  In the end, Jennings Kleen took the win followed by Doyle and then Negri who is putting together a very consistent regatta.  Lars Grael is also coming on strong after a 37 in race one, he has 3 fourth place finishes.  Yesterday’s second place team of Diaz/Prada had a tough day and dropped to 13th overall.  Melleby Revkin still lead with a 3, 8 today.

Mark and I now lie in 7th place.  After tomorrow’s race, the discard will come into effect.  This will tighten up the scores and may shuffle some of the positions.

Two more races are on the schedule so still room to move up and down the board.

For complete scores go to www.yachtscoring.com

After a one hour postponement, the wind filled in from the south east at 10 knots and built to 14 knots as the 10 mile race continued.  The right side of the course paid up the first windward leg and the Italian team of Negri/Lambertenghi led at the first mark.  Mark and I were fairly deep having gone to the left off the line.  We had a very good 1st downwind leg and moved from 20th to 10th.  The Italians led around every mark but got passed on the final leg by just one meter at the finish.

With the wind up to 14 knots on the final run, there was a bit of wave riding going on and big gains could be had.  2017 World Champions, Elvind Melleby and Josh Revkin, took the win while 5 time Olympic medalist Robert Scheidt with Brian Fatih crewing finished third, and Lars Grael with Samuel Goncalves finished 4th.  Down the final run to the finish, Mark and I battled Arthur Anosov with Dave Julius Caesar, and the French team of Xavier Rohart/Sebastian Guidoux.

Mark and I finished 6th and are tied with Robert Scheidt for third place, 7 points off the lead.  Lots of racing left!

For complete scores, go to: www.yachtscoring.com

76 teams from 16 countries have come to the warm waters of Biscayne Bay to compete in the 91st Annual Bacardi Cup.  I am racing the week with Mark Strube.

Before the first race of the regatta, the Star Class family payed its respects in a tribute to Sir Durward Knowles who recent passed away.  Durward was a Gold medalist, World Champion and 31 year Commodore of the Star Class. More importantly his was a friend to all and mentor to the lucky.  He was 100 years old and died as the oldest living Olympic Champion.

Yesterdays race was a tricky one.  The race committee patiently waited for 2 hours for the wind to settle enough to race.  It remained shifty and puffy as the easterly wind came over Key Biscayne onto the race course.

It was “Shoots-n-Ladders” on the first leg as the fleet spread out on the 2 mile leg, and the 15 degree shifts made a big difference!  The leaders at the first mark were last months winners from Ireland, the O’Leary brothers, followed by a pack that included, Diaz, Melleby, Cayard, Doyle, Vassella and Negri.

In the end Diaz edged out Melleby for the win, followed by Negri in third, Mark  and I in fourth and Eric Doyle in 5th.

Today’s race is already postponed by one hour, at least.