The final race of the Challenger Playoff Final was held today on a cloud covered and squally day on Great Sound.  There was an abandoned race that featured the Kiwis leading at mark 1, 2 and 3 and then the wind completely shut down and the time limit ran out.  After a 1.5 hour wait, a southwesterly wind filled in at 8 knots and the race was started at 16:15 local time.

Again, Peter Burling should good control of the pre-start and led at Mark 1.  The Kiwis showed superior speed right away and that was the story of this race.  The Kiwis, finally in the lead from the get go, could never be touched.  They won the final race by 55 seconds and got themselves a spot in the 35th America’s Cup Match against Defender Oracle Team USA next Saturday.

The Kiwis looked very fast today.  It makes me wonder how Oracle would stack up in those conditions.  I think Oracle is faster than Artemis but it is near impossible to speculate on how their speed compares to the Kiwis. Apart from all the board talk, I think the Kiwis are generating more power from their wing.  They have a completely different method of trimming their wing and it is not something that would be easy to copy.  This is a big factor in winds under 12 knots.

So the stage is set.  We haven’t seen the Kiwis vs. Oracle in 10 days.  Surely both teams have moved on since that time anyway.  This is the beauty of the America’s Cup…that first line up, that first time both boats will come off the line screaming toward mark 1. Who will be faster?  If they are faster in 8 knots, will they be faster in 16 knots.  All these unknowns!

Tune in Saturday June 17 to find out.  I am predicting two very even teams and a long, competitive series. 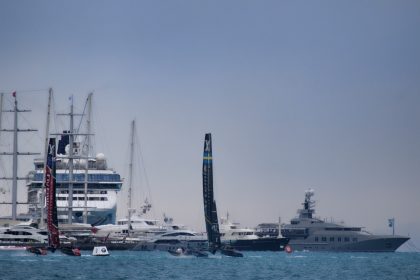 The spectators are starting to show up in Bermuda.