Oracle vs ETNZ start of race 2.      Photos by Richard Smith

The first two races of America’s Cup 35 were held today on Great Sound in Bermuda.  The conditions were on the lighter side of the spectrum with east winds at 8 knots.  This meant that the wind was blowing over the island before landing on the race course, which made for a few big wind shifts.

As with all America’s Cups, predicting the outcome is difficult.  The competitors hadn’t raced each other in over two weeks and both had made several changes and improvements since that time.  So while some felt they could predict the outcome, we really had no good read on how the teams would stack up and that is part of the beauty and intrigue of the Cup.

In the first race, Jimmy Spithill made an uncharacteristic error in getting too close to the starting line well before the starting gun.  He was subsequently “over the line early” which resulted in a penalty, but his whole set up was too early from 1 minute prior to the start.  From there, the Kiwis were simply faster, mainly downwind but also making substantial gains out of every maneuver.

Race 2 was more of the same except the start was a bit more even with Oracle in the favored leeward position but slower. The Kiwis showed they had wheels once again and smoked over the top of Oracle Team USA and out to a comfortable lead at Mark 2.  The Kiwis stretched out to a 600 meter gap before Oracle began to whittle away at their lead on leg 5 by getting nicely in phase with the wind shifts.  Tom Slingsby did a great job here and the boats rounded the windward gate, for the last time, bow to stern.  At the first gybe, the American boat fell off its foils, sunk into the water and the Kiwis sped away and to a 1 minute victory. 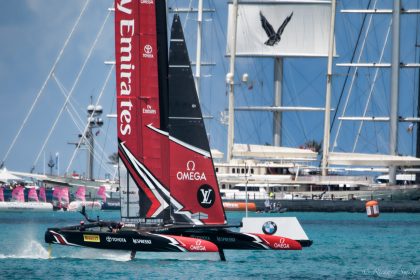 The score after day 1 is Kiwis 1-USA 0.  Remember the USA had one bonus point coming into the match for winning the qualification series two weeks ago.

The American’s have to be a bit shell shocked.  At times, the Kiwi boat was  5 knots faster on the down wind legs and averaged over 2 knots faster for the entire race.  Both teams had their light air board configurations on.  The Kiwis, very angular at about 2.9 meters on the horizontal part of the foil, while the Americans sported their very smooth, almost 90 degree horizontal foil, also at about 2.9 meters in span.

I am sure the brains at Oracle Team USA are hard a work tonight trying to figure out what they can do overnight to put a faster boat on the track to tomorrow. The forecast for tomorrow is 8 to 12 knots from the southeast.  Most of us here believe that a bit more wind would be better for the American’s.  Let’s see if tomorrow’s conditions, plus a tune up, can change the look of this regatta.  Remember, these same Oracle guys are the ones that were down 1-8 and came back to win 9-8 in San Francisco in 2013. 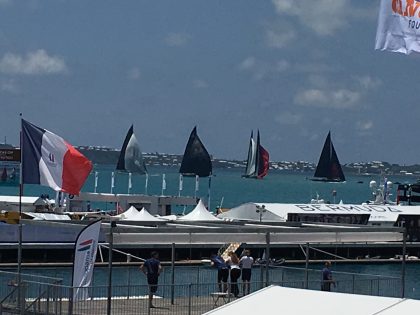 Beautiful J-Boats raced prior to the Cup Match.  This reminded us of the speed difference.