The final three races of round robin 1 were held today on Great Sound.  The conditions were a bit windier than the first two days and the surprises kept coming.

Race 13 featured Groupama Team France against BAR of the UK.  Ben Ainsley schooled Frank Camas on the starting line almost forcing the French onto port tack with just seconds to go.  The French trailed the Brits at the first mark by 10 seconds or so.  Undeterred, the French kept their focus up the first windward leg and made some large gains on BAR. The race was close down the first run with the teams changing the lead twice.  Nearing the second windward mark, the French once again were a problem for Ainslee.  As the Brits approached on port tack near the port gate mark, the French were on starboard,  It looked as though the Brits could cross the French and go the the starboard gate mark which would have made the two fairly even heading down the final run.  Instead, the Brits chose to tack inside the French and round the port and mark.  This made them easy pickens for Camas as he rolled around the outside of the Brits at 30 knots and shot off never to be seen again.  Upset #2!  Maybe these aren’t upsets?  The French actually looked quick and are still have room to improve their maneuvers which is an opportunity for them over the coming week. 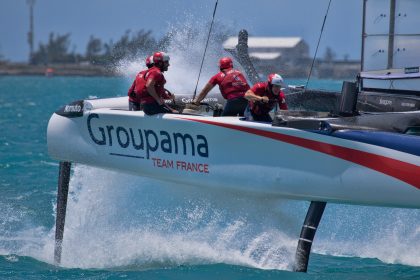 Race 14: This was the big Challenger showdown.  Artemis of Sweden vs. Emirates Team New Zealand. This was one of the best races ever in the Louis Vuitton Cup.  Nathan (SWE) schooled Pete at the start but pulled the trigger just a bit too soon and got penalized for being over the start line early.  So Kiwis lead down the first run and SWE set up the split at the bottom gate. Up the first windward leg, Artemis got in phase and sailed well passing ETNZ.  Down the run, ETNZ got to the east on the course where there is more pressure (wind) and passed Artemis back! Up the final windward leg, ETNZ does a poor job of matching the speed of Artemis as they duck on port.  So the next time they come back together, Artemis is on Starboard and ETNZ has to duck.  ETNZ did a nice job of slowing by luffing rather than reaching off behind Artemis.  This allowed ETNZ to make the right hand gate mark while Artemis made the left. With both teams virtually even, they headed off on the final run at 40+ knots.  Two thirds of the way down the final run, ETNZ on port tack was not crossing Artemis on starboard, so they turned up and went behind.  This set the Kiwis up for starboard tack and inside at the final mark.

Artemis once again looked very polished tactically to me in that they set themselves up to sail wide around the last mark knowing they may have to give ETNZ room but that if they arrived even or slightly behind they would easily roll around the outside of the Kiwis and win the race.  The Kiwis arrived, inside and a bit behind the Swedes.  They Kiwis gybed to head to the finish and the Swedes sailed right around the outside with twice the speed.  Game over.  Race to the Swedes.  Then, the umpires decided that the Swedes had fouled the Kiwi’s in the maneuver.  This was shocking.  The Swedes had to slow and let the Kiwis pass to work off the penalty.  In the end, the race went to the Kiwis.  Needless to say, all the spectators were surprised.  The call from the umpires was that this was a port/starboard infraction.  However, the Kiwi’s had entered the “zone” around the mark so another rule governed at that point.  I think all will agree that that call was a mistake…hopefully not a costly one for Artemis. penalties aside, this was the best race of the event so far! 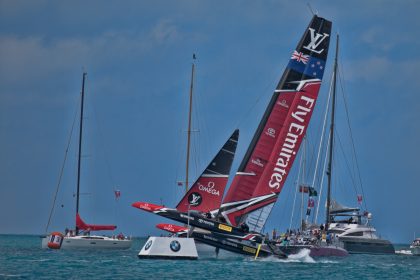 ETNZ doing a wheely after trying to round inside at final mark vs. Artemis.

Race 15  FRA vs. JPN. Dean (Softbank Team Japan) took the conservative windward position at the start and had just a bit better timing and rolled the French on the first reach.  That was about it as Softbank Team Japan never looked back. Their speed and technique was impeccable and they went on to win by a large margin.

So after round robin 1, Oracle Team USA is leading with 5 points, ETNZ with 4, BAR with 3, Artemis, Softbank, and Groupama with 2. BAR only won one of the 5 races but because they won the AC World Series, they carried 2 bonus point into this round and that is saving them right now. At the end of the next round, 15 more races, 5 per team, the last place challenger goes home.

I am feeling more and more every day that this is going to be the best America’s Cup ever.  The boats are exciting.  The races are exciting.  Never have we had this many led changes! The races are short-20 minutes. There are lots of them every day! The energy in the village is great…. lots of different venues within. The Bermudians are so happy and friendly.  The Superyachts are in town!  What a show.

Tomorrow we start Round 2 and the pairings go in reverse order.  First up, Artemis vs ETNZ. You think Artemis will be coming out with a knife in their teeth?