Artemis has had a tough 24 hours.

Three races were held today on Great Sound in 12- 14 knots of wind. It was a day to get more racing in as the forecast for the next few days is very light.  However the schedule was set in stone and so no changes were made.  Four races are on the schedule for tomorrow.

It looked to me that most team had their light air boards on, certainly Artemis and BAR did. Artemis had to race in the first and last races of the day and could not afford to get caught in the last race of the day with the small boards as the forecast had the wind dropping. Its possible ETNZ had smaller boards on in the race against Artemis as the Kiwi’s had just the one race to deal with today.

The first race of Round 2, Race 16, was a rematch of the last race of round 1.  Artemis was up against ETNZ and certainly looking for some redemption after they were wronged by an umpire call yesterday. Nathan Outteridge schooled Peter Berling at the start and Artemis held a comfortable lead all the way around the first lap. Up the second windward leg, ETNZ began making in roads on the Swedish lead.  It looked to me like mostly speed.  The wind did turn right all day so often the boat on the right in the splits would make gains.  Near the top of the second windward leg, the Swedish lead was all but gone. The Kiwi’s were coming on starboard and laying the port side of the windward gate.  Artemis was not crossing and should have gone behind but maybe that was too bitter of a pill to swallow after having a 200 meter lead just 3 minutes earlier. Instead the Swedes tried to cross and fouled the Kiwi’s who still managed to get around the windward mark after bearing away to avoid a collision. Penalty to the Swedes, game over. 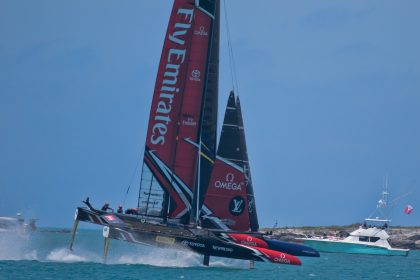 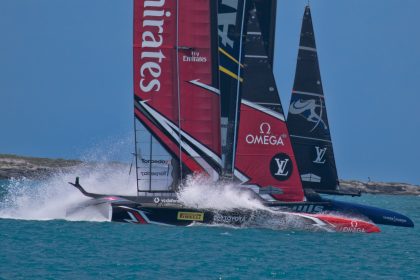 Artemis vs. ETNZ II.  ETNZ gets a little loose coming into bottom gate.

Race 17: France vs. Oracle. No story here really.  Spithill schooled Gammas on the start and Oracle went on to win by a big margin.  One technique thing was interesting: Oracle was coming to the reward mark and a bit “thin”.  They put the windward board down to add lift to the package so the boat would not drop into the water as they “soaked” don to the mark.  Essentially, they crawled in on all fours.

Race 18: This was a huge race.  Artemis vs. BAR.  Either Artemis was going to suffer yet another loss or BAR were going to extend their losing streak to 5 in a row. Artemis got too close to the line too early and Ainslie was able to create gauge off the Swedes which allowed him to pull the trigger earlier and have more speed at the start.  BAR rolled around the Swedes and led the whole way. The race never got close.  The teams seemed pretty even in speed, both on light air boards I think.  Artemis has a hard 90 degree radius in their board where BAR is a softer radius. The harder the run, the more draggy I believe but also makes the span and the righting moment greater which are both pluses.  Interesting tradeoffs.  So far, technique and sailing skill has outweighed all these small design details.

Now is a good time to tell you about the format of this America’s Cup.  For the first time ever, the Defender is doing some racing with the Challengers, and it counts.  The Defender, Oracle Team USA is racing these first two round robins with the Challengers.  The team with the most points at the end of Round 2, will take one point with them into the America’s Cup, unless it is a challenger who doesn’t qualify for the Match.  A bit confusing but we will cross that bridge later if we need to.  The last place challenger will be eliminated and the defender will exit the racing and move to the finals starting June 17. Privilege of winning last time.