Softbank and Oracle looked solid in the trying conditions

Four races were held at the very bottom of the wind range today on Great Sound. The wind speed topped out at 7 knots today while 6 knots is the minimum windspeed for racing as stipulated in the rules. All boats struggled to keep the boats foiling, some more than others.  After the first three races, it was clear that the French and BAR were struggling the most and this made the fourth race of the day most compelling.

Race 19. France vs. Japan.  Japan starts on foils, French are not.  Huge speed delta.   Japan is able to foil almost the entire race.  French are not. Japan wins easily.

Race 21. Oracle Team USA vs. Softbank Japan.  These two teams have shared design information as allowed by the rules and trained a lot together.  Both had similar ability to stay on foils. Oracle, late to enter, gets “dialed up” above the entry line. After one minute, Oracle gets penalized for not entering the starting box. Japan has lead into first mark and down to the bottom gate and maintains the led up the first windward leg and down the first run.  At the bottom gate for the second time, Oracle creates the split, takes left gate and heads right.  Oracle has decent wind despite that side being slightly under the land.  As the teams cross with Japan still in the lead and heading to the right (west), Japan falls into less wind while Oracle now finds more wind on the left.  When Japan tacks, their leeward hull falls in the water and they can’t get foiling.  Oracle remains foiling in the good pressure on the left side of the course and makes a 300 meter gain and takes lead. Oracle remains in control and takes win.

Race 22.  BAR vs. France.  We could tell from the previous races that these two teams were struggling about equally and suspected that this would be a good match, and albeit painfully slow, they didn’t disappoint.  BAR got a penalty on France in “dial up”. Cammas does a great job of working off the penalty with minimal loss of distance. Down the first run, as both boats gybe, they both come off the foils and sit down in the water. They become displacement boats rather than foiling boats.  Unfortunately, it looks like both these teams are deficient with their boards or possibly the power being generated by the wing.  The race was a true battle with many lead changes.  The race was shortened to finish at the top of the second windward leg. Around the last bottom gate, both boats took the left mark with BAR following the French by 60 meters.  The French made a good rounding foiling throughout.  Ainslie tacked shortly after rounding as he was in the French turbulent air. The French do not cover!  The French stretch into the lower right hand corner, behind the land. They tack and get stuck in lighter wind, not foiling.  BAR on the left is foiling the entire time and comes back just 20 meters behind the French.  At the next and final cross, the French have to duck and cross behind BAR.  BAR wins.

The final race was the best race of the day.  It looks like Japan, Oracle and ETNZ have the right foils and or ability to generate more power from the wing.  We will see these conditions again.  Is Artemis in the same league.  We don’t know as they didn’t race today. 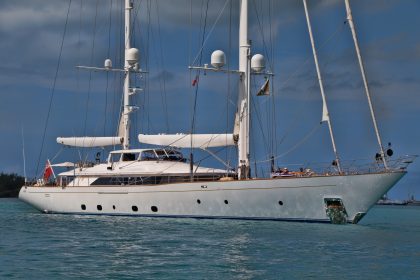 The beautiful SV Rosehearty on the race course yesterday…no wind.

Another interesting note is that after Oracle finished their one and only race today, they stayed out  and trained alone for another hour when normally, all teams head in after they finish racing.  Despite leading the qualification rounds and looking likely to take the point for winning this stage into the Cup, Oracle press on knowing that their speed today is not enough to win the Cup in three weeks time.

Four races are schedule for tomorrow and the forecast has the wind up a bit to 8-12.  Four races are then scheduled for Saturday and this qualification round will be over. The Defender will go off on his own and the last place challenger will be dropped from the competition.  The remaining four challenger will begin the semi finals on Tuesday June 6 and finish by June 9.