68 J70’s lined up for the first two races of the 2016 World Championship on Tuesday on Berkeley Circle… the eastern side of San Francisco Bay.  After three days of “non San Francisco” conditions over the wekend-85 degrees with sailors waiting around for wind while complaining of it being to hot in the parking lot-“San Francisco” came back.  In the second race of the day, conditions ranged from 18-25 knots with choppy seas which left more than one competitor on his side with the gennaker up.

I am sailing as tactician on Carlo Alberini’s-Calvi Network.  I sailed with Carlo and the rest of the team two weeks ago in Riva del Garda as a training exercise.  We got a few days of training in here in San Francisco but we are still relatively new to each other.

In the first race, which was delayed until noon, the fleet was anxious and pushed the line too hard resulting in an eventual “black flag” start.  16 boats were identified in the black flag start.  As boats are not called in a black flag start, they don’t go back or get out of the way of those who started properly.  This factor had a negative effect on our race as we were in the fourth row at the start and had to dig our way out ultimately only getting to 23rd at the finish.   Further, I didn’t make the best calls tactically so we didn’t move up as much as we should have in the 12-14 knot southwesterly winds.  The first two boats across the line had been identified as “Black Flag” and therefore the third boat actually won the race.  This was Judd Smith and his boat Africa. Second place went to Joel Ronin in his Catapult with John Kostecki calling tactics and trimming the mainsail.  Current world Champion Julien Fernandez in Flojito y Cooperando with Bill Hardest calling tactics scored 3rd.

For the second race, the famous San Francisco fog started to show itself and the wind came up to 18 knots at the start.  This start was again under the black flag but we found a low density place along the line and had a clear start.  Our speed immediately was good although Judd Smith was just to leeward of us and going a bit better, eventually forcing us to the right.  We went all the way to the right which is historically the way to go when racing on Berkeley Circle.  We rounded the first mark first with a 100 meter lead.  The downwind was about high speed planing and keeping the boat under control when gybing.  Carlo sailed very well in these tough conditions and we managed to hang on and win the race.  In close pursuit was Claudia Rossi, also of Italy, and the current European Champion, with her Petit Terrible who were faster than us both up and downwind.  They are going to be very tough in this regatta in my opinion.  In third was a good friend of mine Chris Kostanecki of Ross, CA in his Jennifer with my childhood friend and Olympic medalist Jeff Madrigali calling tactics. 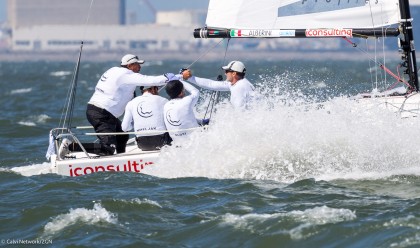 Today’s schedule is for three races beginning at 11:00.  The forecast is for 12-16 knots of wind from the southwest.  The water will be choppy again as the current will be going out of the bay most of the afternoon. This will be a long and tiring day-as if three races wasn’t enough, there is the one hour sail home after racing to get back to the Club.

For complete results and live tracking go to: https://www.stfyc.com/j70worlds2016