The Day started off with the Quarter Finals. Arthur and I tuned up before the fist race with Jorge Zarif and found out then that he was very fast after his retune last night. I think I may have said too much when I told Augie Diaz what I did the night before to retune my mast,  Still we felt we would be competitive. Shortly after the start, we crossed France close and they yelled and protested. The umpires reached for and grabbed the green flag (no foul) and then paused for about 30 seconds, discussed, and eventually decided to penalize us.

It was a set back for sure but early in the race. We battled the French for the 5th spot that qualified for the semi final most of the race but in the end they beat us across the line and we were eliminated finishing the event in 8th.

Jorge Zarif/Pedro Trouche (BRA) won the Quarter Final, the Semi Final and the Final by a healthy margin. He had another gear today even on Robert Scheidt who won the qualifiers by a 20 point margin. Scheidt/Boening finished second and Negri/Kleene finished 3rd.

This was the 6th SSL Finals and the thoughest yet. The level keeps going up. I certainly didn’t sail great this week. Decent I suppose. I am disappointed because I think we had more potential than 8th. We were on the back foot all week, only just getting up to race winning speed yesterday.

It was an honor to be out on the water this week with all of the competitors!  At my age, I appreciate the opportunity to compete with the the best in our sport.

That’s it for this year. Next sailing for me will be in Antartica in early January. I’ll send some pictures! 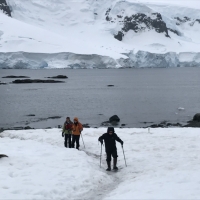