Two races were held today in a postcard perfect Miami.  10-15 knots from the North and clear blue skies.

The Walker Cup is in honor of Harry Walker, who served the star class as secretary for many years.  The 43 competitors were competing to win the Walker Cup but also as a tune up for the 88th Bacardi Cup that stars tomorrow at the same venue.

Brian and I continued our good form by wining race 1 wire to wire.  We started at the pin end of the line (left side), with that end being favored 10 degrees, and never took anyone’s transom.  With that win,  that we had a 8 point lead in the regatta. 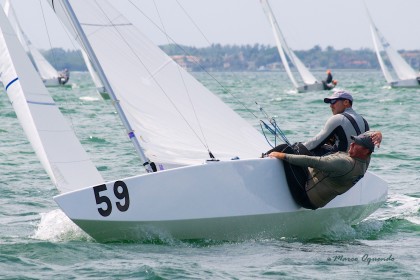 The second start was less that perfect as we had a boat directly on our wind as the gun went off.  We managed to dig our way out of 20th to finish 6th.  The German team of Schmidt/Seeberger sailed very well to take the final race in the now fresh 16 knots of wind.

Brain and I were trying a few new things this weekend on the boat.  Obviously it went pretty well but we will be continuing to try some things next week during the Bacardi Cup as we prepare for the World Championship in April.  It is important to keep trying to raise the bar…up to a point.

The forecast for the upcoming week is generally windy.  16-20 knots, with gust up to 25, from the North East going South East as the week goes on.  So the temps and humidity will be up with the wind coming off the 82 degree ocean.

For complete results go to www.yachtscoring.com.