Three races were held today on Biscayne Bay for the Star fleet.  The Winter Series fleet has swollen to 40+ boats in anticipation of next weeks Bacardi Cup.

The wind was generally steady in direction and strength with 10-14 knots from East Northeast.  This made for a shifty day as the wind was coming over Key Biscayne onto the race course.

I am sailing with Brian Fatih for the first time.  Brian is an Olympian from the 2012 Games where he crewed for Mark Mendelblatt USA.  Mark and I were team mates in the Athens games where Mark sailed the Laser.  Brain and I will race this weekend (the Walker Cup), then the Bacardi Cup next week (88th edition!) and finally the Star World Championship in April, all right here in Miami. Its a good regatta schedule with two important events in our sport.

So Brian and I are trying to build our team work, our vocabulary, and our maneuvers in light of the events we have in front of us.

Today was day 1 and a good start.  We struggled with a lack of speed in race one but went very fast down the last run to finish 5th.  Peter Vassella and Phil Trinter won this race.  We made some rig changes for race 2 and were fast up and downwind.  After and excellent start, we won this race after a battle with Torkel Borgstrom of Argentina done the last run to the finish.  In race three, we didn’t have such a good start but sailed the shifts well, and with good speed, to finish second.  Thomas Loffsted of Sweden won this race.

After three races, Brian and I are leading with 8 points, Vassella/Trinter in second with 11 and Loefstedt in third with 13.  Current Wrold Champion Lars Grael is in 4th with 18 and So Cals Jim Buckingham is 5th with 19 points. 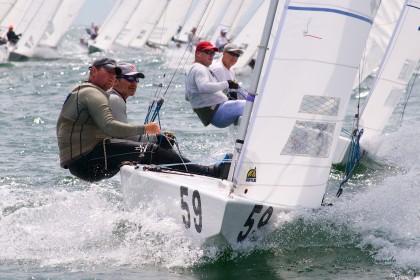 Two races are scheduled for tomorrow with  a forecast of 8-10 knots from the east.

For complete results go to www.yachtscoring.com and look for the Walker Cup.