The 92nd Bacardi Cup is history. Eric Doyle and Payson Infeliz sailed incredibly consistently to win. There were 8 Gold Stars (past world champions) in the fleet of 65 teams from over 15 countries.

Magnus and I had a rough start to our week, a great middle, and a rough ending, finishing 7th overall after dropping our rig yesterday. We went into the last race in second place and as the only other team that could win. We will just remember races 4 and 5 which we won by healthy margins.

Next for Star sailing is the European Championship/SSL Breeze Grand Slam, in May on Lake Garda. In two weeks I will be racing on Rosehearty with Joey Kaempfer and Nicholas O’Leary (IRE), one of my competitors this past week. 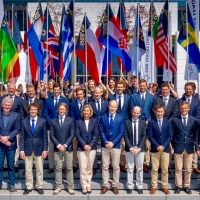